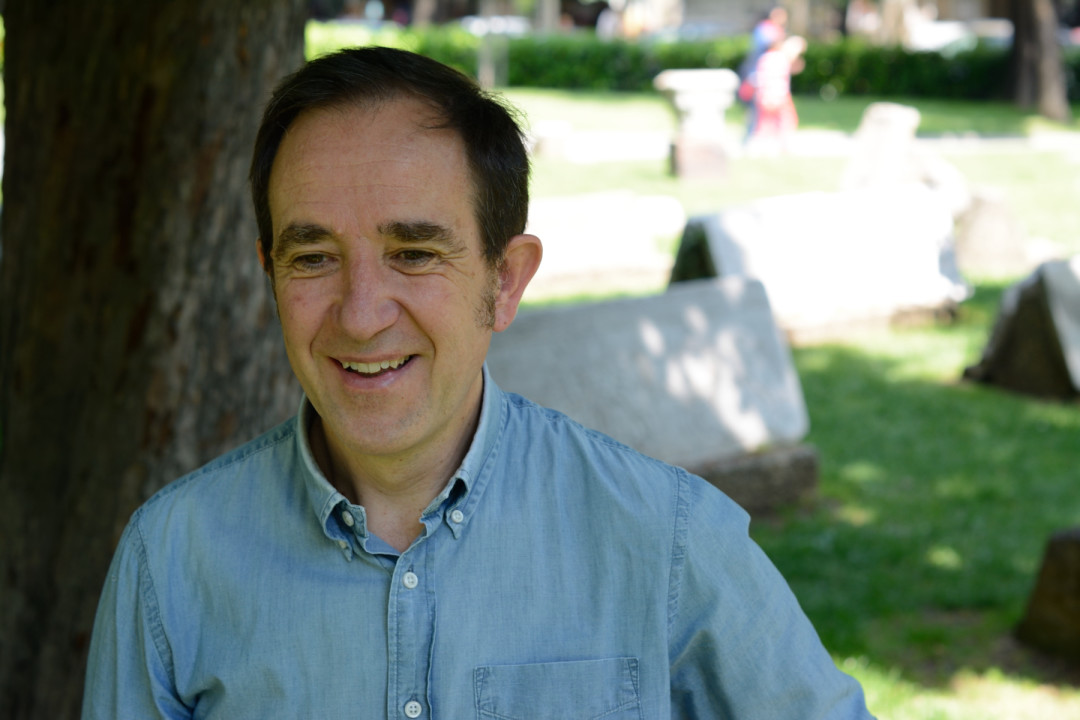 He is a Basque, a Spaniard, a European, a true cosmopolitan. He has lived and worked in various cities in the world. We first met each other in New York without suspecting that after several years we would work together, here in Sofia. He’s been in our country since September of last year as the Director of the Cervantes Institute, the Spanish cultural and language centre. He has brought with him the ambition of the American spirit, the subtle finesse of the European soul and the curiosity of the explorer. We met one Sunday in the Doctor’s Garden, a favourite place for us both. He was with the smallest girl in his family, namely the mischievous Jack Russell terrier, Mina. I asked him about various things which I’d long been curious to find out regarding him. Here is the whole of our conversation with Javier Valdivielso. 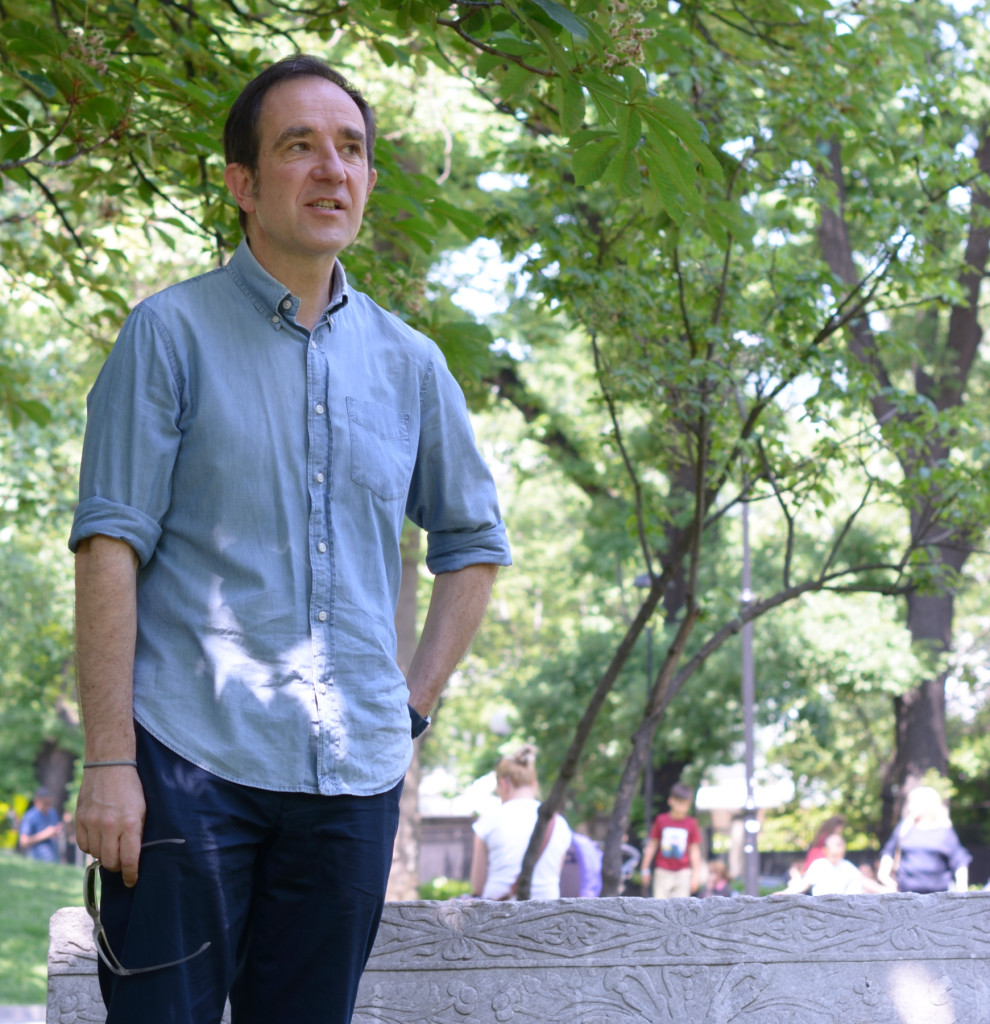 As part of the Cervantes Institute’s team you’ve worked and lived in different cities in the world, spread out over several continents. Which ones are they exactly and could you describe them in a word?

Our tour started in Casablanca, a city which reveals both the traditional and the modern face of Morocco. Casablanca is dynamic and chaotic, a city cloaked in a white light which comes from the open expanse of the Atlantic Ocean on one side and the nearby desert on the other. Rabat was my second city, once again in Morocco. Rabat is calm, engulfed in greenery and swathed in gardens. Rome brought me back to Europe, the most beautiful city in the world. A grand Lady, slightly worn, aging a little, but fully aware of the treasures she conceals around each corner. New York took me to America. New York is a city which leaves you with the impression that you have seen it before. Hurried, dynamic, live, infectious, but also difficult: in it you can discover many different realities. My second return to Europe is Sofia. Your capital is unpretentious, welcomes one tenderly, with modesty, which touches one; it’s gloomy in winter and alive in spring.

You’ve dedicated many years to this institute. What is it that makes you continue to be part of the Cervantes Institute?

The Cervantes Institute is a relatively young institution, a very strong one which provides the opportunity to work in a cultural and academic environment. It also offers a life in different places in the world, each of which is a new beginning and presents new challenges. All of this is particularly motivating for me.

How did you feel when you found out that you were going to be the Director of the Cervantes Institute in Sofia?

The opportunity to take on the position of director pleased me greatly. I hadn’t foreseen that this would be the destination I’d continue my path in, so Sofia proved to be a place I needed to discover at first, a city about which I had very little information at my disposal, a place which will leave its mark on my life.

Is there something from the experience you’ve acquired in the places listed above which you could transfer here?

Yes, everything. All the experience from the various cities I’ve been in has given me something and maybe it has taken something from me, but everything has fallen into place in such a way that I am able to be aware of the meaning of my professional endeavours in Sofia.

Have the months you’ve spent in Bulgaria taught you something new, revealed something new to you about the world or about yourself?

It’s the first time I’ve held the position of ‘Director’. I have extensive professional experience but I continue to learn. Bulgaria has let me get to know unpretentious, intelligent and affable people. On a personal level I have also experienced strong emotions and feel that they are transforming me.

In Bulgaria you don’t stop-every day you’re in a different place. What is our best-kept secret which you’ve uncovered or has been revealed to you?

The cultural profile of Bulgaria is being created at this moment. There are many already established foundations and organisations, but apart from them there are many young people with a desire to change their country, to modernise it and who are ready to face risks to achieve this.

How do you relax the best, what recharges your batteries and gives you strength?

I perceive my work as the greatest stimulus for life, every day is different, every project is a unique opportunity which has been provided to me.

You never have enough time to….

…to distribute it between my daughters, my other half, and work at the Cervantes Institute. Nor to read, to watch more films, to listen to music.

Two of the most significant events for the Spanish-speaking community in Sofia are coming up: the traditional Week of Spanish and Ibero-American Cinema and the Day of the Spanish Language. Let’s talk a little about them. Within the framework of WSIC, the Cervantes Institute will present two films to the Bulgarian public-Loreak/ Flowers (2014) and Buscando a Eimish/Looking for Eimish (2012). The selection was yours: why did you pick out these two films to present?

Yes, in the Cervantes Institute we decided on these two films. Loreak is a representative of Basque cinema, of the Basque language; it was presented at the cinema festival in San Sebastian and was also awarded a host of prizes and has nominations for the Goya. One of the goals of the Cervantes Institute is to popularize the other official languages of Spain, which are Galician, Basque and Catalan, as well as the culture of all these autonomous regions. Loreak fulfilled this goal and is a film whose international recognition we must support. ‘Looking for Eimish’ was suggested by Begoña-she also works in the Institute and is linked via personal friendship to the director of the film, Ana Rodriguez Rosell. This gives us the opportunity to show the film and invite her at the same time, which in turn gives the Bulgarian public the chance of a meeting and conversation with one of the creators of the film.

You’re from the Basque Country: in your view is it possible to talk about Basque and Spanish cinema?

As a diplomat, I’ll answer you by saying that we can speak of cinema which is either high-quality or not. But yes, all of the productions which are brought into existence in Spain are Spanish cinema and bear within them the diversity and immense cultural heritage of this country.

Could you share with us 5 names which are a starting point for getting to know Basque culture?

I’ll dare to highlight a few names from the end of the 20th and the beginning of the 21st century, some of whose lives have ended but who are important in getting to know Basque culture.

In your view, what is the success of Basque cuisine in the world due to?

It all started with a group of master chefs who, in the 70s and 80s of the last century, looked at traditional Basque cuisine in a new way, adding a French influence. Basque cuisine at the moment is the counterpart of the French Nouvelle Cuisine, which has reached the Basque Country. They were the first to modernize Spanish cuisine as a whole, basing themselves on the foundation of traditional recipes.

You are from San Sebastian: if someone has just a few hours at their disposal in the city, what would you recommend they do in order to get to know the city best and to feel its true spirit?

If you have just a few hours, take a walk all along the coastal area of San Sebastian, from the ‘Comb of the Wind’ sculpture by Chillida to the new Paseo Nuevo promenade. You’ll get hungry. Enter the Old Town and go to 31st August Street, go into Fuego Negro (modern cooking), La Sera (traditional cooking) or La cuchara de San Telmo (modern cuisine). Eat, drink and enjoy yourself!

Going by some of the latest exemplars of Spanish culture, which have enjoyed success outside the borders of the country too, I mean the film, 8 appellidos vascos and the theatre play Burundanga by Jordi Galseran, a person is left with the feeling that the Basques have recently learnt to talk about themselves with a sense of humour. Is it really like that?

In the last few years, the Basque Country has gone through a difficult period of violence and has suffered bloody blows. Now every attempt at self-irony is welcome and we need it. We are not so self-important and we can even be funny.

The Day of the Spanish Language is approaching: a celebration for all of us who speak Spanish. Why in your view is it nice for a person to learn the Spanish language?

We are going through a historical moment for the Spanish language. We ought to make use of it. Spanish is spoken by more than 500 million people worldwide and they are the bearers of an exceptionally rich and diverse cultural heritage.

Your favourite word in the Spanish language is: Libertad/Freedom

Why? Defending our freedom and human rights is the basis of our system of values. 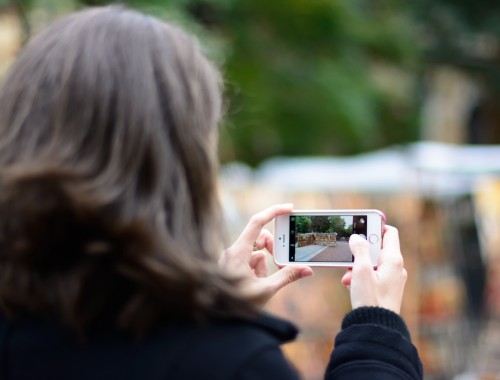 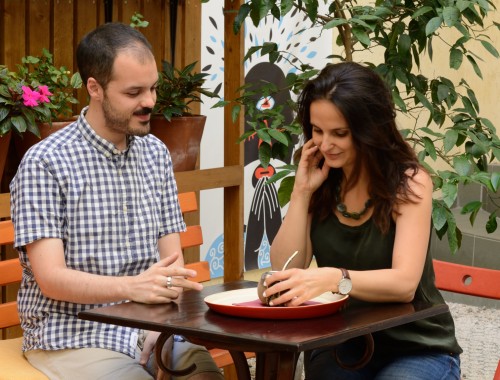